By registering with us, you'll be able to discuss, share and private message with other members of our community.

Might as well get this ball rolling.
I am here today to showcase a variety of my so far created Magical Girls (and occasional boys) that I actually have artwork of.
Cause, y'know. I'm an artist. And I draw stuff.
This could get a little longer, so sit tight for a bit of a ride.

Imma start with one of my first classics, Chrissy Iolite, a Magical Girl based on a gemstone, powers and all. Surprisingly I actually researched for this, so basically it's a young adult man with absolutely no sense of direction and a weakness for blueberries who just wants to live a normal darn life. He also likes order, but ironically can't seem to keep up order himself, anything he touches returning into a mess shortly after he cleaned it, no matter how hard he tries. With an amulet he one day finds lying on the ground in the city, he is suddenly able to transform into Magical Girl Chrissy Iolite, named after the gemstone in the amulet, whose powers literally revolve around order (and a little bit of spirit), which one would think would be helpful to even out this man's weak points... except he never asked for any of this! So he's stuck forced to save the world as Chrissy Iolite, whether he wants to or not.
Here's the first artwork I did of this a few years ago.

I later redrew Chrissy when I returned to add a team and a mascot to her. 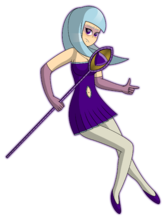 Speaking of which, the mascot actually came first. I'm not even sure anymore at this point if I had the mascot before or after Chrissy, their creation times were pretty close to each other I think. Anyway, Chrissy's mascot (and my only mascot) is named Aurakimily, and she is a race called "Foxicornix", which is a hybrid between a fox, a unicorn and a phoenix. Her abilities include giving people magical powers, healing people to some degree (but not being able to revive dead ones), taking a human form, flight and the ability to revive from her own ashes (but only if all ashes are present in one place).
Aurakimily can sense if someone has the potential to become a Magical Girl, and can only grant magical powers to those with that potential. Also interesting is that this mascot does not discriminate. If the Magical Girl uses her powers for good, Aurakimily of course prefers that and is glad to help out. If that magic user decides to become a villain however, Aurakimily will not hesitate to help them as well, as she is bound by an oath to stay by the side of all her Magical Girls until they die or lose their power.
Anyway, this was her first art. 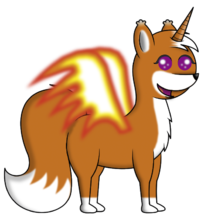 And these were different fashion choices for her human form, also from a few years back.

I also redrew Aurakimily when I added an entire gemstone team. 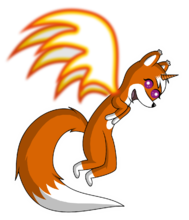 As for said gemstone team, I never really fleshed them out as much as the two above, so just have their names (from left to right): Rose Quartz, Gold Pyrite, Riley Malachite and Tori Tac (who claims to be a Magical Girl, but apparently really, really, REALLY dislikes EVER turning into her magical form, so that one's a mystery). 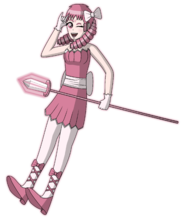 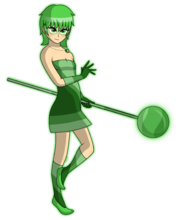 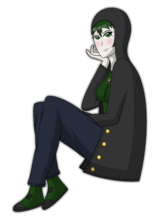 Let's move on to the next individual then. This one is a Solo Magical Girl who I actually created for a Danganronpa Fangan Video Series I wanted to create, but who knows if I'll ever get that done. As such, she's more sprite-y. Anyway, her name is Kimmi Bengo, the Ultimate Magical Girl... because she's the only Magical Girl in that world. She is very self-conscious about being chosen as the Ultimate Magical Girl solely because of that and therefore doesn't like to brag about her magical powers, which are mostly minor, but still real nonetheless. Often feels like she doesn't really belong, but is actually a pretty smart cookie. She, too, is aqcuainted with Aurakimily, actually.
Here's what she looks like.

She's actually the only one I actually made a video with. A meme one, but still.
Something Something Kimmi Meme

Then there's a rather new Magical Girl (from around August 2019) who I literally generated through rolls using some sort of Magical Girl rolling sheet because I wanted to challenge myself by making a random Magical Girl and then drawing what they would look like. The way the rolls went, it turned into a duo actually. Below are my youngest Magical Girls at age 7, spirit mage Cure Boo and a twin soul of her as part of her power, Cure Wail. While both have the abilty to find specific places or items with ease and can also glide (but not fly) through the air, Cure Boo specifies in seeing snippets of the past, present or future through her crystal ball staff, while Cure Wail is the hitter, being able to use barrages of spirit fists to take out small armies of weak foes with ease.
Out of Magical Girl Form, Boo is a young adult man who is actually a Magical Girl fanatic (this fact made him buy his crystal ball staff at a shady merch store in the first place, buying it just because it looked cool and discovering that it was real later on). Ever since he became Cure Boo, the other part of his soul, Cure Wail, remained by his side even out of Magical Girl Form, taking the appearance of a regular 7-year-old girl that gives him quite a handful of trouble, always clinging to him and wanting to be taken care of.
Below are images of them in regular form (left) and Magical Girl Form (right). 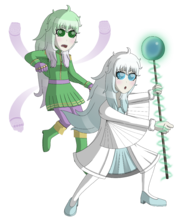 And finally, I'll finish off with my newest Magical Girl Group to actually have some sort of Artwork: The Pacifists. This is the first Magical Girl Group that I created mainly for the sake of storytelling and not just art, and I actually made 3D models of them in VRoid Studio as opposed to my usual approach of drawing them. And no, I have no idea how to 3D model, hence I use VRoid (lol). The main point of the Pacifists is that they have pledged to reform all evil to become good as opposed to fighting and killing their enemies, no matter how evil or irredeemable they may seem. Their story focuses on how hard that kind of goal can actually be.
Below is that 3D promo artwork I did for the thing.

And I guess I might also share the link to Chapter 1 of their story (I've put links between the Chapter Docs so one can navigate back and forth between chapters without me needing to link to every chapter individually). At the moment there are 3 chapters to read.
The Pacifists Episode 1

That concludes the long ride through my current Magical Girl arts. I tried to keep the rundowns short, so I omitted quite a few things, and I also have a few more characters in my storage that I don't have actual art of, but I believe this is more than enough anyway.
Thank you for coming to my TED Talk having been on this ride.

Hooooooly cow! That's A LOT of stuff! Seems we have a very powerful creative mind in here, don't we?

These characters feel really vivid, fresh. Although their designs seem simple, they are quite striking, mixing the best of anime and modern cartoon desingn. And the colours look so nice in them! Top-notch coloring skills! I especially like Riley Malachite, probably due to her having a more dynamic pose than the rest of her team, although all of them look neat.

I'll probably read the Pacifists story later, but I've seen you have already written almost 40 pages! I can't even write more than 20 in a single story...

Hope to see/ read more of your work here! Keep the magic going, pal, 'cuz you're doing a great job!

"If anyone ever tells me it's a mistake to have hope, then I'll just tell them they're wrong.
And I'll keep telling them until they believe. No matter how many times it takes!"​
You must log in or register to reply here.
Share:
Facebook Twitter Reddit Pinterest Tumblr WhatsApp Email Link
Top Bottom